Only the highest standard of workmanship and technology can be utilised in tunnel construction because of the seriousness of potential fire sources and type of combustion. This was seen in the British channel tunnel fire.

Most of the systems that we have installed have been tested in Australia and abroad to withstand the heat generated by a Hydrocarbon fire that is caused by car and truck fuel and their cargo.

Our work has included:

In the North Connex Tunnel project, Greyton has used a cement based M2 vermiculite product to resist the harsh tunnel environment providing a 2 hour rating. The cement based product sprayed to the steel and mechanical ducts for our client, BSA, not only provides a higher heat rating tested to the Hydrocarbon fire curve but also resistance to blast, hose stream and very damp conditions.

Greyton was engaged on this project to provide a 2 hour Hydrocarbon fire rating to the 2000m2 concrete cut and cover slab on the East and West bound lanes of the new M4 motorway near the Homebush tunnel entry/exit. This was a Promat Tunnel specification using the Fendolite 2 cement based vermiculite spray product 65mm thick applied in two coats, and a specially sourced stainless steel mesh, fixed to the concrete with stainless steel anchors.

Greyton sealed over 600 wall and floor penetrations for Downer Engineering and BHBB. Most of the penetrations had to achieve a 4 hour rating such as the two photos showing cables passing through block walls. The product is a fire rated mortar called GFS1000.

Promatect fire rated demountable partitions with 4 hour fire doors and frames. Designed to be dismantled to move large plant and machinery through. The fire rating on the wall is 4 hour -/240/240 and has an acoustic rating of 51 STC. The system is very durable and will withstand very high pressure and damp conditions which is displayed on the photo.

There were a number of fire rated access panels supplied and installed by Greyton. The panel is constructed with a Promatect L500 board, lined with a galvanised steel cover on either side.

Concrete slab upgrade to 4 hour 240/240/240 with Promatect H 25mm board mechanically fixed to the concrete soffit. This is to protect against hydrocarbon temperatures caused by fuel fires causing concrete spalling 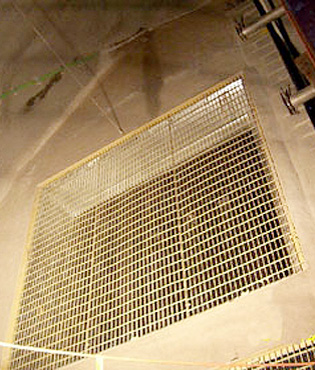 Finished Promatect H wall system around two of the fan outlets. These fans are approximately 4mx4m each.

Cable tunnel before any of the 12 partitions and doors were installed. On the right are the fans in the plant room which was separated from the rest of the tunnel by a Promatect H wall system.

Finished main wall plus small Promatect wall with standard fire door. This smaller wall is demountable to allow removal of the large fan.

Installing the rockwool in the walls. This core provides the basis for the sound and heat insulation.

Promatect wall built around one of the fans and sealed to the shotcrete.